Starting in the Heart of Cabrini-Green

By The Hand began in 2001 with 16 kids from Cabrini-Green—one of the nation’s largest housing projects. To serve more kids across the city—those with the greatest need—we have grown to five locations in four of Chicago’s most dangerous, under-resourced and marginalized neighborhoods. Today, By The Hand serves more than 1,600 kids and plans to serve nearly 2,000 by the year 2021.

Beginning as a pilot program of The Moody Church, By The Hand Club For Kids is a Christ-centered after-school program that emphasizes academic excellence and nurtures the whole child—mind, body and soul. Today, By The Hand is a 501(c)(3) nonprofit organization with continued oversight from The Moody Church. 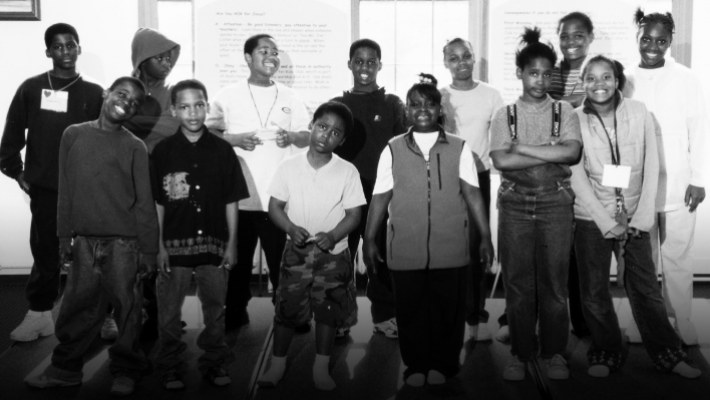 In 2001, By The Hand began with 16 kids from Cabrini-Green. Since then, By The Hand has witnessed great transformation in the lives of our kids—and as an organization.

MAY 12, 1997
God revealed the vision for By The Hand Club For Kids to Donnita Travis, who felt called through prayer to start a holistic after-school program to help children have new, abundant life (John 10:10).

1997 TO 2000
Donnita volunteered at The Moody Church to help with ministry to children living in Cabrini-Green.

OCTOBER 2000
Donnita resigned from being the president of an advertising firm to launch By The Hand Club For Kids in the spring of 2001.

MARCH 20, 2001
Using classrooms at Moody Church, By The Hand began with 16 children from Cabrini-Green. Ms. Shanta, the first staff member, agreed to work without pay until donations were received. Donnita served as a full-time volunteer and continues to do so today. Donnita began sharing her God-given vision to serve 1,000 children by 2012.

JUNE 2001
Even though the Chicago Housing Authority (CHA) declined many other nonprofit organizations, it agreed to lease the bottom two floors of a Cabrini-Green high-rise tenant building to By The Hand, recalling that Moody Bible Institute students had faithfully served the children and families of Cabrini-Green throughout the 1960s during rioting, shootings and turmoil.

SEPTEMBER 11, 2001
By The Hand Club opened its new location at 419 W. Oak St., in the heart of Cabrini-Green, expanding to 32 kids from every part of Cabrini-Green and Marshall Field Homes. Even though By The Hand was told that kids from rival gang territories could never be brought together peacefully, God used this to teach the children that they are all created in God’s image and should love and respect each other accordingly. Recognizing that the kids would be terrified and confused because they lived in high-rise apartment buildings, By The Hand remained opened after terrorists attacked the World Trade Towers and the Pentagon even though many businesses and organizations closed. As a result, 9/11 turned into a day of prayer during which the kids were receptive to hearing about God and His love for them.

FEBRUARY 2003
Outgrowing its space at 419 W. Oak St., By The Hand asked the CHA for a lease on the Lower North Center, a 24,000-square-foot building with classrooms and a gymnasium, located across the street from its current location. Negotiations had stalled, but God encouraged Donnita through prayer that a man would talk to her in two days about Lower North. Two days later, Franklin Ballenger, youth ministry partner, spoke to Donnita and encouraged her to pursue a lease.

JUNE 2003
By The Hand started its Club For Big Kids (CBK), a high school program.

SEPTEMBER 1, 2004
For only $100 per month, the Chicago Housing Authority gave By The Hand Club a 5-year lease for the 24,000-square-foot Lower North Center in Cabrini-Green, allowing By The Hand Club to expand that year to serve 214 children. A week later, pipes in the 419 W. Oak building burst and flooded the building, which was demolished that December, making it obvious that God had provided By The Hand Club with a new place in perfect time.

MARCH 7, 2005
In response to the CHA request that By The Hand open a second location in the Altgeld-Murray neighborhood, By The Hand Club prayerfully agreed if $600,000 was raised in 60 days to confirm the decision and provide first-year funding for the new club. CHA referred to By The Hand Club as their “most effective social service agency.”

MAY 6, 2005
A final gift was received to reach the needed $600,000 and By The Hand Club announced that it would open a location in Altgeld-Murray.

JULY 2005
By The Hand became a 501(c)(3) nonprofit organization and formed a board of directors.

SEPTEMBER 2005
By The Hand leased an empty police station from Chicago Housing Authority to open a second location in Altgeld-Murray with 66 children.

SEPTEMBER 6, 2005
By The Hand Club began serving kids from Altgeld-Murray at the local Park District while renovations were made to a CHA-leased property. The Club was serving 310 students at two locations.

APRIL 2007
By The Hand Club felt God’s leading to open a third facility in Austin, one of Chicago’s most under-resourced neighborhoods. A general contractor friend introduced By The Hand Club to a newly renovated church owned by Chicago First Church of the Nazarene. The 8,000-square-foot-facility was located at one of the most dangerous corners in Austin—the perfect location for reaching kids from the neighborhood. By The Hand finalized the lease agreement over the summer months. Later the contractor shared that while he was renovating the church in 2005, he prayed that By The Hand would open in that facility.

SEPTEMBER 26, 2007
By The Hand was out of space in the Altgeld police station when they heard that one of only a few privately owned properties in the CHA development was going on the market. It was an 8,000-square-foot Presbyterian church on an acre of land at the front of Altgeld-Murray—ideal for By The Hand Club For Kids. By The Hand was able to purchase the property before it went on the market and began renovations in October 2007.

JULY 2008
By The Hand added a reading specialist to help children in fourth grade and up who couldn’t read; kids advanced on average two grade levels in reading during the 2008-2009 academic year.

SEPTEMBER 2008
By The Hand opened its fourth location in Englewood with 88 children in first to fourth grades.

AUGUST 2009
By The Hand added a college specialist and started emphasizing college prep at CBK.

2009 TO 2010
By The Hand Club was serving 176 children in first to eighth grades in Austin and was out of space. Unable to serve high school students without additional space, they began seeking the Lord while looking for opportunities to lease, buy or share space. After an exhaustive search, By The Hand launched its first capital campaign to build a new learning center in Austin. By The Hand was able to acquire three vacant lots for $1. After Donnita fasted three days, By The Hand received calls from two other property owners who offered to sell their lots. A fourth initially said “no,” but changed his mind after “everything started going wrong at his property.” In total, God blessed By The Hand with 17 lots from seven different owners, enabling By The Hand Club to begin construction in winter on a 26,000-square-foot ministry center for after-school programming, as well as community and ministry collaboration and instruction.

MAY 26, 2010
Donnita Travis was named the Northwestern Kellogg School of Management Social Entrepreneur of the Year.

AUGUST 24, 2010
The Austin location was overcrowded, noisy and had no room for its incoming ninth-graders. While the Chicago First Church of the Nazarene offered to purchase the foreclosed house to the north, demolish it and install modular classrooms as an interim solution, they could not get any information from Freddie Mac, the holder of the mortgage. By The Hand called a supporter at Freddie Mac and within 24 hours the contract was signed, making it possible for By The Hand Club to stay at its current location while it built a new facility across the street.

SEPTEMBER 2010
By The Hand started CBK in Austin and Altgeld to serve ninth-graders.

MARCH 8, 2011
Mayor Daley gave Donnita Travis the Sage Award for her work with women and children in Chicago.

SEPTEMBER 2012
By The Hand Club crossed the milestone of enrolling 2,500 kids over last 11 years.

OCTOBER 31, 2012
By The Hand broke ground for its new Austin center to accommodate kids in first grade to twelfth grade.

DECEMBER 17, 2012
By The Hand holds official Groundbreaking Ceremony for its new Austin center.

JUNE 4, 2013
By The Hand kids, along with several dignitaries, families, friends and staff, “crossed over” from our old By The Hand Austin building to a gleaming new $6 million, 26,000-square-foot center that is being called the “gem of Austin.” The nationally acclaimed Marching Band of Proviso East High School led the way.

DECEMBER 17, 2014
Chicago Public Schools (CPS) gave Moving Everest a charter to open a K-8 school in Austin to serve 810 children. By The Hand will serve the ME children in the after-school hours.

JANUARY 30, 2015
By The Hand Club broke ground on a three-story, 50,000-square-foot building to serve students attending ME Charter School during the day and By The Hand in the after-school hours.

AUGUST 20, 2015
Austin children, parents, friends, neighbors and public officials celebrated the opening of the $12 million By The Hand Club and Moving Everest Charter School with a ribbon cutting.

OCTOBER 5, 2019
By The Hand Club broke ground on a new By The Hand – ME middle school facility in Austin. The 30,000-square-foot addition will serve 270 sixth- through eighth-grade students—critical to their academic journey as they prepare to enter one of Chicago’s best public high schools.

OCTOBER 25, 2019
By The Hand opened iCity—a citywide enrichment center located in downtown Chicago—to provide learning opportunities that prepare our high school students for careers in areas of their interest.

FEBRUARY 21, 2020
By The Hand changed its high school program name from Club For Big Kids (CBK) to NXT—short for NEXT. The program was named NXT to emphasize that young people are always moving forward, always working towards the next grade, the next level in school, the next career pursuit, the next opportunity to do better… and be better.

JUNE 4, 2020
Former Chicago Bears linebacker Sam Acho and other athletes met with By The Hand students to discuss how to create change after the devastating riots, leading to the purchase and donation of a looted liquor store for By The Hand to convert to a pop-up food market.

JULY 2, 2020
Demolition begins to replace the Belmonte Cut Rate Liquors store on N. Laramie Avenue with a fresh food market that will sell fruits and vegetables, addressing Austin’s food insecurity. Located 60 feet from By The Hand – Austin, the market will be operated by our high school students, providing them with opportunities to develop business skills.

AUGUST 19, 2020
By The Hand high school students opened Austin Harvest for business. The fresh food market will provide residents with access to fresh, healthy food—a needed solution after neighborhood grocery stores closed because of looting and fires during protests against racism and police brutality.