Thank you for your prayers and support for our children during this great hour of need. There is no more important time for us to show our families and the world our love and care.

Fifteen members of By The Hand Club For Kids went home with fresh sneakers, hats, jackets and Chicago Bears gear straight from the closets of some of the team’s stars. 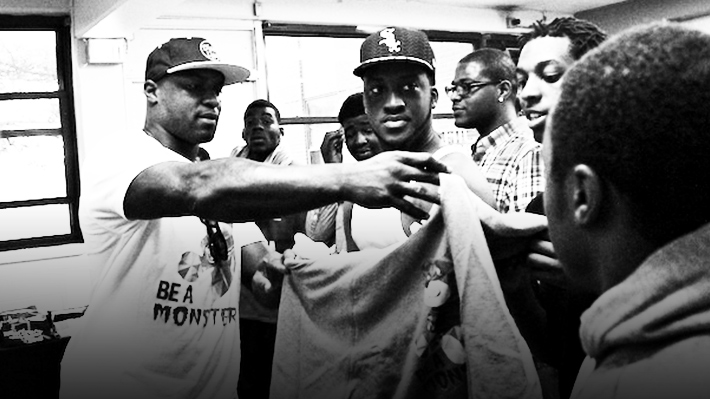 The event was the first of its kind put on by middle linebacker D.J. Williams, who was at the By The Hand Club’s Cabrini-Green Center to talk shop and eat pizza with the students Monday night.

Williams said he and fellow Bears players are constantly being sent the latest gear from Nike and other brands that filled up their closets.

Instead of giving the shoes and clothing away to a second-hand store as he has done in the past, he figured it would be best to give them to some deserving kids in the city.

Bears wide receiver Brandon Marshall and defensive back Tim Jennings dug into their closets for the event. In total the Bears players supplied 44 pairs of sneakers.

“The weird looking stuff is probably B-Marshall’s,” D.J. Williams said while the students browsed the items. Williams said he hopes to hold a number of similar events in the future, adding the dozens and dozens of shirts, shoes and pants were from just three of the team’s 53 players.

“This is a blessing,” said Anton Amison, a recent graduate of Schurz High School who was one of the first students to attend the after-school club. “A lot of guys in the hood don’t get a chance to do this.” Williams advice to the 15 students selected from each of the sites for the special event was to work hard and find yourself.

“What makes you cool is when you are comfortable in your own skin and being who you are,” Williams said. By The Hand Club For Kids started in the spring of 2001 with 16 children attending and has since grown to 1,000 this year.

The after-school club was started in the Cabrini-Green area with a single location, and has since grown to add locations in Austin, Englewood and Altgeld-Murray.

“It was just such a blessing for our kids to just receive brand almost-new stuff, clothes and shoes not to mention that they had come from the Chicago Bears,” said Susannah Schwarcz, senior director of fund development at By The Hand. “It was huge. It just really lifted their spirits.”