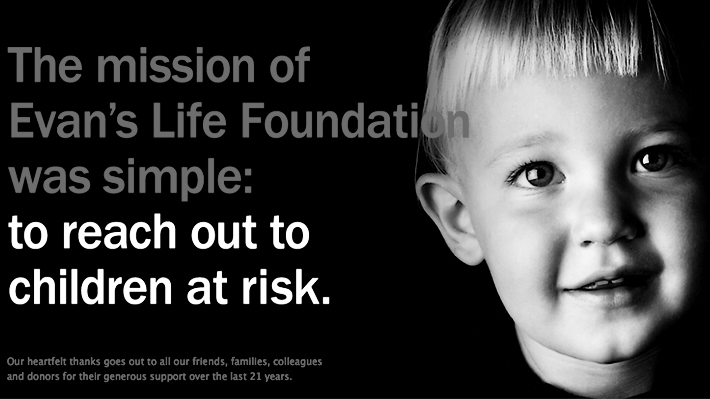 Greg and Pat Samata of Barrington lost their 2-year-old boy, Evan, on June 20, 1992, when he darted into traffic, lured by a playground he spied across the street. His parents were sitting with him at an outdoor cafe in San Francisco on vacation. Evan slipped away for a brief moment, was struck by a car and died in the hospital hours later.

The Tribune had profiled the Samatas and their successful graphic design business just a year earlier. The Samatas often brought Evan to work with them. He would play with his Fisher-Price toys while they worked.

“At first, I didn’t like the idea of him coming to work with us, because I thought having a crying baby in the background didn’t sound so professional,” Greg Samata said at the time. “But now I think it’s kind of cool that he’s able to have more time to spend with us and bring this added dimension to our lives. Nine out of 10 times, if a client hears him in the background, they think it’s fine. Some are even envious that we get to bring him to work.”

A year after that interview, Evan was gone.

Out of their pain, they built Evan’s Life Foundation, a charity organization that helps children born into extreme poverty. For 20 years, the foundation has helped Chicago-area children by paying for medical care, hiring a tutor, buying a winter coat, hosting a dream-come-true summer pool party — anything that grants a wish for a needy child.

But now it’s time to close that chapter too.

In November, the Samatas and their board of directors decided to close Evan’s Life Foundation and give a $500,000 gift to By The Hand Club For Kids, a faith-based after-school program that serves children in Englewood, Austin and several low-income housing projects. The program serves nearly 1,000 children identified by their school principals as failing. They receive tutoring, counseling, warm meals and spiritual guidance.

The Samatas bonded with the program’s executive director, Donnita Travis, who assured them Evan’s memory would live on. A portrait of Evan will hang in the foyer at By The Hand’s Austin location, and the children served by the organization will undertake an annual service project in Evan’s name.

In a letter to friends, the Samatas thanked their longtime supporters but said it was time for a change. “We speak for the entire Evan’s Life board when we say we see this step as a new beginning rather than an ending,” they wrote.

Out of tragedy, built from grief and bound with pain, life began anew.