For two years the Tribune’s ‘New Plan of Chicago’ series has explored the city’s intertwined challenges — failing schools, violent streets, faltering neighborhoods. These pernicious problems don’t topple to a single solution, but they can be whittled away, child by child, family by family, neighborhood by neighborhood. Last spring we spotlighted 12 cost-effective solutions to help Chicago flourish. Today we launch the next chapter of this series. Our theme: Chicago Can Do This. Exhibit 1: By The Hand. 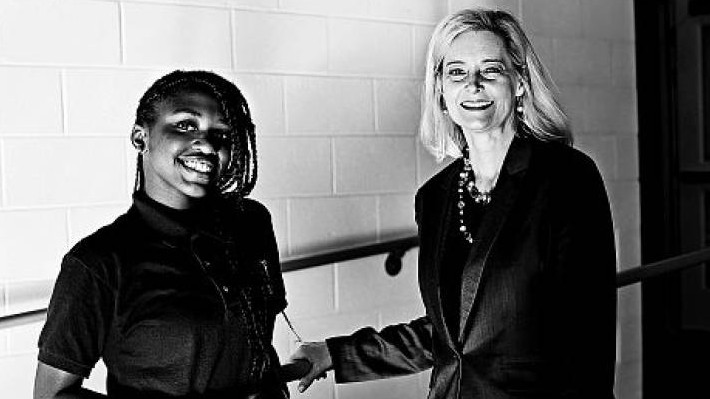 At 3:30 on a recent afternoon, a boisterous tide of children floods into the sun-dappled lobby of Moving Everest Charter School in the Austin neighborhood. The children, in the school uniform of crisp gray T-shirts over khakis, jostle as they line up; one boy, grinning, breaks ranks to high-five a visitor.

School’s over, but these children aren’t going home yet. The after-school hours are a perilous time for children in Austin, one of Chicago’s most dangerous neighborhoods. But this is prime time for By The Hand Club For Kids, a dazzlingly successful after-school academic program and haven for inner-city kids.

The club’s regimen starts with a hot meal of chicken fingers and rice for children who often miss a solid meal at home. Then comes class

— some children gather in front of an instructor who reads aloud “Brianna, Jamaica and The Dance of Spring.” Others are deep into a rambunctious Bible study class, a call-and-respond chant rising: “Gimme a J, Gimme an E ….” Later, By The Hand instructors will help children with homework and reading.

This is a faith-based organization with faith in the principle that even children who have fallen behind academically, who live on Chicago’s toughest streets, can thrive if they get help with their homework, their health and their faith.

This is a club based on unwaveringly high expectations: All children, no matter how young, are offered — and expected to take — a By The Hand-sponsored college tour every year. Every child’s locker at the school (Moving Everest leases its space from By The Hand) is festooned with a college sticker from Northwestern, Valparaiso, Howard, Wheaton — each sticker bearing that student’s name.

Most kids come to By The Hand because they lag academically. Chicago Public Schools principals recommend grade school students for the club. CPS pays nothing; the club’s more than $7 million annual budget comes mainly via donations from individuals, foundations and corporations.

This is a club based on founder Donnita Travis’ belief in metrics. You measure it. You own it. Examples: BTH boasts impressive reading gains for many of its students: Over the past year, its first- through fifth-graders advanced an average of 1.6 reading grade levels (measured by a computerized instructional program); for sixth- to eighth-graders, the figure was 1.3 levels.

Just as impressive: By The Hand says 95 percent of its students have earned a high school diploma or a GED. A growing cadre of club members is enrolled in college or has graduated.

Problem, meet solution. In 2000, Travis quit the Near North Side advertising agency she helped found because “my passion for advertising was replaced by my passion for these kids. I felt like I was supposed to do this.” She had a Northwestern MBA and minimal experience in a Moody Church-based program, volunteering to mentor kids who lived at Cabrini-Green.

How did Travis build By The Hand? With a business plan: By The Hand focuses on helping students learn to read, via computer-guided learning and individual tutoring. Travis rattles off the key stat: Inner-city kids who fail reading in third grade are 13 times likelier than other youngsters to eventually drop out.

But the club doesn’t just offer academic help. It helps kids get the care they need. In 2014, for example, 206 children received new eyeglasses via By The Hand. Another 323 got major dental work.

By The Hand doesn’t just take children by the hand. It also reaches out to their parents. By The Hand instructors are expected to visit students’ homes every two months. Many are in contact daily with parents via text, phone or social media, letting them know of a child’s progress — and needs.

In the spring of 2001, the first club hosted 16 children. This year, 1,180 children will fill clubs in the Englewood, Austin, Cabrini-Green and Altgeld Gardens neighborhoods. One donor, PJ Huizenga of Oak Brook-based Huizenga Capital Management, tells us: “You’re feeding the child physically, mentally and spiritually, which I think is critical if you’re going to see long-term change and long-term results. I really think this is a model that the rest of the country should look at. It’s extremely impressive.”

And so are the children.

When we visited By The Hand’s headquarters, a new and striking $6 million structure on North Laramie Avenue, we met Kristina Bell, a vivacious eighth-grader and cheerleader at Howe Elementary. Her favorite subject is math she’s studying exponents at the moment — and she enjoys tutoring classmates.

Kristina came to By The Hand two years ago, when her reading grades were lagging. Now she boasts of earning a spot on Howe’s honor roll. Even though she now has excellent grades, she stays with By The Hand because, Kristina says, “My mother doesn’t think it is safe” to linger in the neighborhood after school. “I’m not a fighter so I’m afraid of being on the streets,” she says.

Kristina dreams of attending Harvard and becoming a doctor or lawyer. “I don’t know which yet,” she offers with a dazzling smile.

If you ever think that Chicago’s problems are impossible to solve, we invite you to spend a few minutes with Kristina and her club mates.

You’ll come away knowing what we know: Chicago, you can do this.

And Kristina, so can you.

This article originally published in the Chicago Tribune.