Athletes join By The Hand Club For Kids students to bring positive change to the Austin community.

Tyler Lancaster grew up 30 miles from the Austin neighborhood on Chicago’s West Side. It’s practically on a direct line between his suburban home in Romeoville, Illinois, and his college campus at Northwestern University in Evanston.

He never stopped on his travels back and forth.

“It definitely seemed like it was a world away,” Lancaster said.

That is, until one day this past June he will never forget.

That’s when the Green Bay Packers defensive tackle joined a group—led by former Chicago Bears linebacker Sam Acho and including more than a dozen Chicago-based professional athletes—that toured the Austin neighborhood in the days following the protests and riots sparked by racial injustice, including the police killing of George Floyd in Minneapolis.

“I was struggling,” Lancaster said. “Mentally, I was in a rough place because I was sitting there, and I was like, ‘There’s so much misfortune and injustice in the world right now, and what am I doing?’ I was sitting there thinking, ‘Are you useless?'”

Acho, one of Lancaster’s regular offseason workout partners, wanted to know if Lancaster was interested in joining his group. From that phone call to the ensuing tour of the neighborhood to conversations with kids in the area, their vision became clear: The group would tear down a liquor store and turn it into a much needed grocery store that would not only serve the community with healthy food options but also provide jobs for young people. 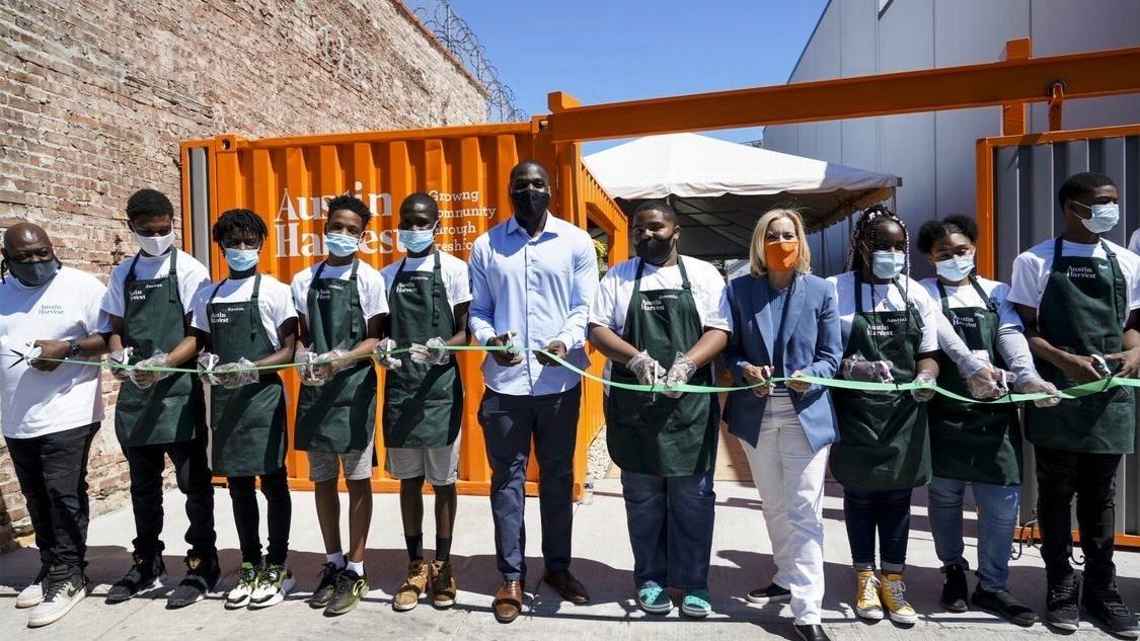 Sam Acho, along with neighborhood youth, celebrates the opening of Austin Harvest with a ribbon-cutting.

‘What am I going to do to create change?’

That call from Acho came on the night of June 2.

Lancaster remembers it specifically because he spent part of that day talking with fellow Packers defensive tackles Kenny Clark and Montravius Adams, among others, about current events. At the same time, Packers players and coaches were in the process of putting together a video in which they made a call for change.

“I knew I had a privilege over my entire life of not growing up in the same way that people of color have grown up, and I knew there was an injustice,” Lancaster said. “Where I struggled is as a white person because I felt like I could tweet and retweet things and post on Instagram and all that, but I felt like I was just jumping on. Yeah, it’s raising awareness. But I felt like at that point, everyone is aware. But what are we going to do next? What am I going to do to create change? And that’s where I was struggling.”

Acho had no idea how strongly Lancaster felt.

“I just knew Lanny is an amazing dude,” Acho said. “He cares.”

Days after the phone call, Lancaster joined Acho and a host of other athletes for a meeting and tour of the Austin neighborhood. Acho was familiar with Austin from his work there with By The Hand Club For Kids, an after-school program.

“The idea was born that, ‘What if we got guys from all the different teams in Chicago together?'” Acho said. “I just asked if he wanted to be a part of it, and Lanny gave a resounding yes. He even said, ‘Man, I’ve been waiting for something like this.’ We all were.”

Acho started with who he knew.

“I called up [Bears quarterback] Mitchell Trubisky,” he said. “I was sad. I was crying. I was in tears, and I was like, ‘What is America? Mitch, do you want to come?’ And he said, ‘Whatever it is, I’m down.'”

Trubisky then called teammate Allen Robinson, while Acho’s next call went to Lancaster, who called his former Northwestern teammate Austin Carr, a receiver with the New Orleans Saints, and it took off from there.

Together with the By The Hand Club For Kids, they met with kids and police officers who regularly patrolled the area. After the killing of Floyd, they organized small groups of listening circles in which those who live there could express their concerns.

“… it’s actually getting together with the community to try and make a positive difference. And this was something that felt very important to get done in one of the neighborhoods that needed help.”

“It was inspiring,” Toews said. “It was a crazy time with all of the protests in Chicago. I’m sure a lot of people wanted to make a difference but weren’t sure how. I’ve been a Blackhawk for 13 seasons, and I’ve never had the chance to be a part of anything like that with other Chicago athletes from every pro sports team.”

“It’s not just doing stuff on social media; it’s actually getting together with the community to try and make a positive difference,” Trubisky said. “And this was something that felt very important to get done in one of the neighborhoods that needed help.”

But first, they wanted to listen.

“When Sam brought together the athletes, it wasn’t, ‘How can we buy some property and turn it into a fresh market?'” said Rodney Williams, director of entrepreneurship and economic development for By The Hand Club For Kids at the Austin location. “It was more everything that was going on—George Floyd, the riots, COVID-19—and let me check on your mental state and how you’re holding up.

“Sam organizing the talking circles, to be able to hear [people in the community] out, it was just amazing, some of the feedback they got expressing the concern for their community and how to move forward. Whether it was the police or the riots or the COVID, the kids had the sense that there was no hope.” 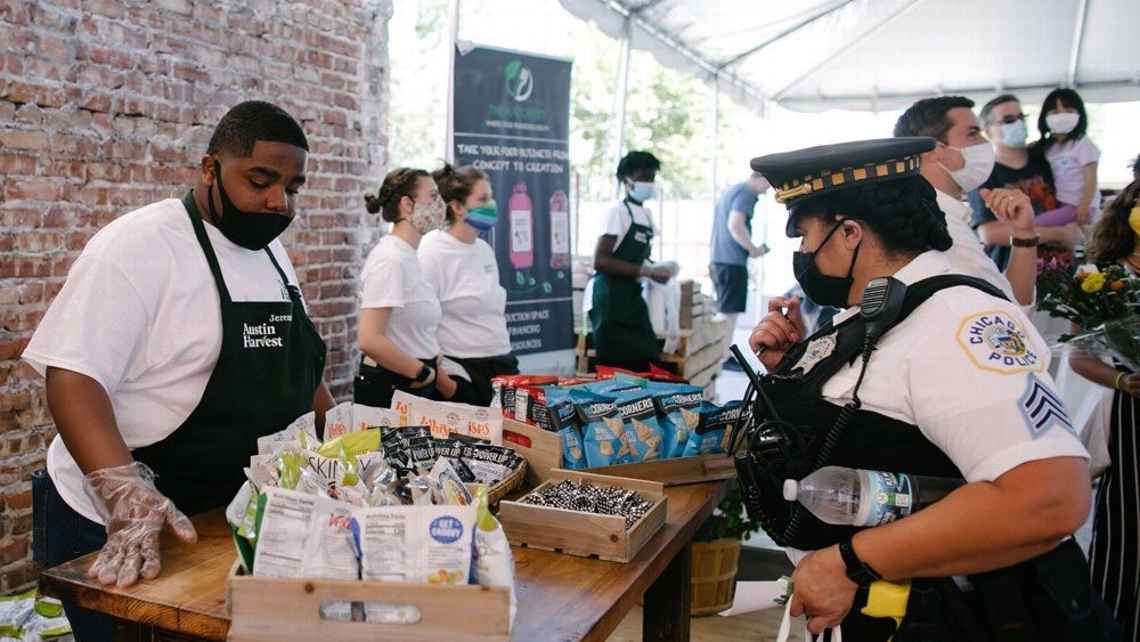 An old liquor store has been turned into the pop-up store Austin Harvest, serving the neighborhood with healthy groceries and skills training for youth.

In search of areas to make improvements, the athletes boarded a bus and toured the neighborhood.

Located on the city’s far west side, Austin’s population is almost 80% Black with a median household income of just more than $33,000, according to a Community Data Snapshot from 2014-18.

Near the end of the tour, Acho asked Heyward: “How many liquor stores have you counted?”

It was more than that.

“In a half-mile radius, there were 17 liquor stores,” Acho said. “And guess how many grocery stores there were? Maybe one or two.”

Said Lancaster: “It was a food desert.”

An estimated 12.8% of the U.S. population lived in “low income and low access areas” in 2015, according to the USDA’s most recent data. Those areas are also known as “food deserts.”

It was on that bus ride, Acho recalled, they asked one another: “What if we could change something?”

“In a half-mile radius, there were 17 liquor stores. And guess how many grocery stores there were? Maybe one or two.”

Their idea was this: Buy one of the liquor stores, and turn it into something more productive for the neighborhood.

“As we drove around the West Side of Chicago and after the looting and the rioting, they only had one grocery store really and that grocery store had been looted,” Robinson said. “Those locals didn’t have anywhere for them to purchase groceries. So being able to get that up relatively quickly I know that was huge for the community, and that’s what it’s all about.”

The athletes raised the money themselves—$500,000 in a matter of days—to buy Belmonte Cut Rate Liquors, which had been looted in recent riots, convincing the owner to sell.

“We wanted to give the kids a place of employment and an opportunity to earn some money as well as provide what seemed to be missing in the community,” Lancaster said. “A big thing Sam focused on was we wanted to get the money ourselves so that it’s all paid for by the athletes. We wanted that to be a catalyst for other projects.”

‘Something that’s not just a speech’

The By The Hand Club, which has five locations and serves more than 1,500 kids across Chicago, had been trying to buy the liquor store for nearly a decade. The store was located next door to the Austin neighborhood club at 415 N. Lamarie Ave.

“Our bus dismissal every night was disrupted by the crowd, the drunks that hung out at the liquor store,” Williams said. “The kids had to walk through the crowds of people, and it had been a thorn in our side for years.”

A month after the initial tour, the group broke ground with a ceremonial sledgehammer to the liquor store. In attendance were NFL commissioner Roger Goodell, Chicago mayor Lori Lightfoot and police superintendent David Brown. 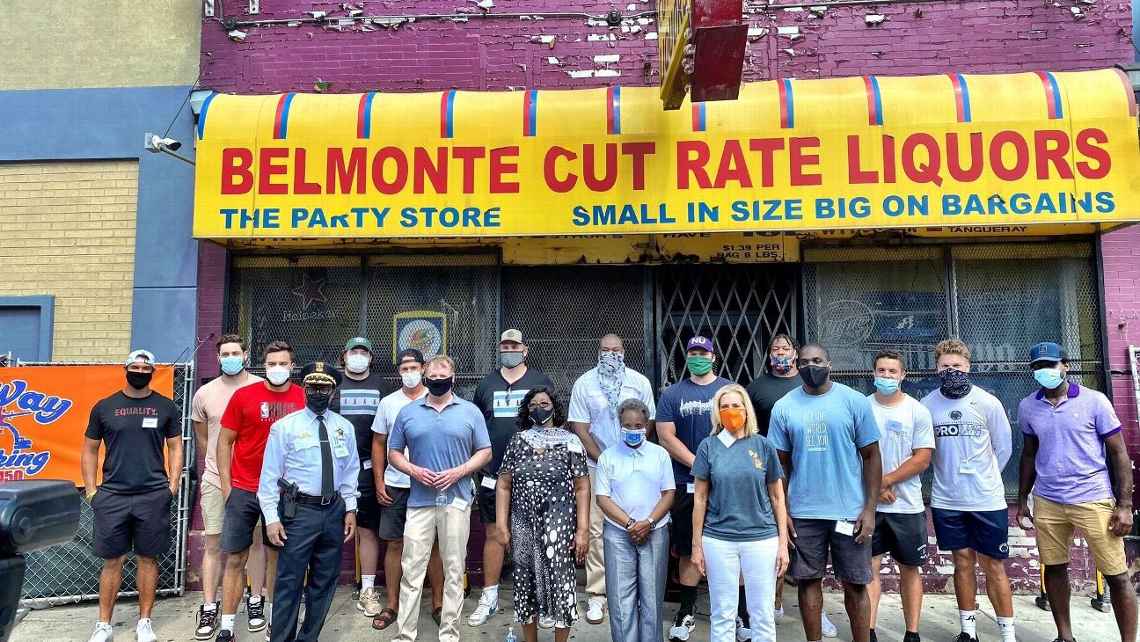 “This was incredible, this was inspiring, and it was really wonderful to see what Sam and the other professional athletes were doing along with the By The Hand organization and bringing people together to help make a change in this community,” Goodell told reporters who attended the groundbreaking in July.

“You could see it in the faces of the kids, how happy they were to have people here believing in them and supporting them and investing in them. This is going to be a great change in this community, and it’s going to fill a big need.”

“It was exciting to see how little it took when you get all these Chicago athletes together on the same page,” Toews said. “I’m looking forward to seeing how far this can go.”

The store initially operated as a pop-up market, open Mondays, Wednesdays and Fridays for several hours in the afternoon and evening this past summer and into the fall.

“The kids have finally walked into something that’s not just a speech,” Williams said. “We’ve been mentoring and encouraging them for years, but this opportunity made the things that we’ve been telling them come alive.”

“We’ve been mentoring and encouraging them for years, but this opportunity made the things that we’ve been telling them come alive.”

Rodney Williams, By The Hand Club For Kids

The store was staffed by kids from the neighborhood, some of whom had never had a job.

“They’re getting experience, getting paid, getting entrepreneur experience,” Acho said. “They’ve opened bank accounts. Half of the kids there didn’t have bank accounts, and to top it off, they have healthy food in their community.”

There’s talk of a permanent structure someday, but as the area prepares for the winter weather, the market is expected to close at the end of this season.

But this isn’t a stop-gap project. Austin Harvest will reopen when it gets warmer, and the hope is others around the city will follow.

“It was amazing to see all the athletes from various sports and backgrounds come together to see the unity in the city and understand that more work can be done to make this an even greater city,” Subban said. “We are also hoping that it demonstrates to future generations that we can live together as brothers and sisters regardless of skin color and accomplish great things.”